Volkswagen distributed a teaser image of the eighth generation Golf GTI hot hatch before its world debut in Geneva.

The picture of the novelty is not the first, but the second in a row. The nuance is the following - in the last photo, the diesel Golf GTD was shown, and the nameplate on the radiator of the hatch indicates that it is part of the GTI line.

Motor specifications in the Golf GTI are unknown. Most likely, the hot hatch will acquire a 245 hp gasoline engine. After some time, more powerful modifications will begin their sales, for example, the 300-horsepower Golf TCR with the 333-horsepower Golf R.

The first shown version of the novelty with a diesel engine known that a car will have "one of the cleanest engines in the whole world." The 2.0 TDI Evo engine will receive dual-dose technology. Such a system was taught to lower the decrease in the level of nitrogen oxides by 80%. 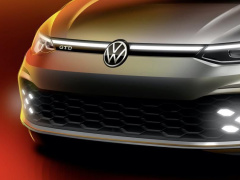