Skoda told about the newest crossover

The sketches demonstrate the optics of the future car in the Scala and Kamiq styles. The Czechs press service said that during the development of the headlights with the lanterns of the next car, the designers took inspiration from Bohemian crystal.

The novelty will acquire narrow headlights with LED crystals, as well as lanterns with a 3-dimensional pattern. The appearance of the Skoda crossover will receive "balanced dynamic proportions." The company also said that the car's dimensions are entirely different, not like those of their previous SUVs.

The basis of the Skoda Enyaq is the MEB modular platform, which was developed at Volkswagen for new-generation electric cars. The car will share the central units along with the groups with the Volkswagen ID.4 coupe-crossover.

Officially, the Czech electric crossover will be declassified on September 1 in Prague. 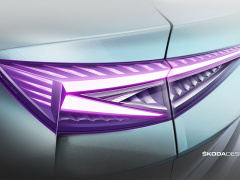