Next Year's Infiniti QX80 With V8 Motor And Current Underpinning

The “next-gen” 2018 QX80 from Infiniti will keep its current body-on-frame architecture as well as 5.6-litre eight-cylinder petrol motor, tells the president of the company.

Senior vice president at Nissan and the Infiniti Motor Company’s president stated that the current vehicle’s underpinnings will be used as well with the 298kW eight-cylinder petrol motor.

He told that the powertrain will be the same. The vehicle is perceived as a very successful one. So, if you look at powertrain, 7-seat capacity will fit right in.

Infiniti’s chef also mentioned about the addition of a smaller powerplant. Motor Trend says it can be a turbocharged six-cylinder unit. It can be the 298kW twin-turbo motor that equips the Q50 and Q60 Red Sport versions.

It looks like both the QX80 and the Nissan Patrol will soldier on with the regular underpinnings and powerplants. 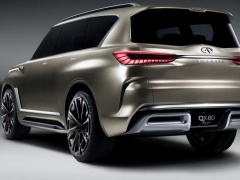