As you may know, Honda has refused from the 2-door and six-cylinder versions of its longstanding Accord, the sedan took home North American Car of the Year again for this year.

The Accord Wagon is 1st up. Even though the rendering does not look as cute as earlier wagon concepts, it still adds another portion of usability to a sedan with pretty darn versatility.

At the same time the coupe concept looks sportier. The automaker ditched the rear doors for a set of bigger doors at the front.

It does not look like the producer will include wagon and coupe versions from the factory, who forbids dreaming of the two paired to the producer’s turbocharged 2.0-litre motor?! 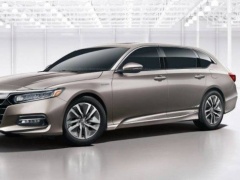