First official promo has been made by Daihatsu for its new Copen.

Concept variant of the production model saw the world last year in Japanese capital. Full-fledged vehicle does not seem to have lost its active sporty look.

A few details can be made out looking at the outside of the car. Earlier the brand announced that 2015 Copen would come with a convertible top folding in less than half a minute. Approach to body design is very peculiar with the vehicle being composed of thirteen removable details. In such a way, every customer can choose the way his car would look like.

Lightweight feature makes it perfectly understandable that power figures won’t be astounding: horsepower will total 64 and torque - 68 lb-ft. Powerplant version is a turbo engine. Gearbox array is presented by a manual for five speeds or continuously variable with seven gears.

Solidity improvements are to be expected from the new chassis advertised as exceeding the current one by three times. Torsional rigidity has also been upgraded for better handling performance. 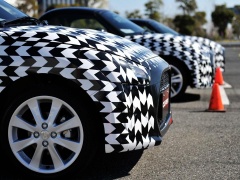