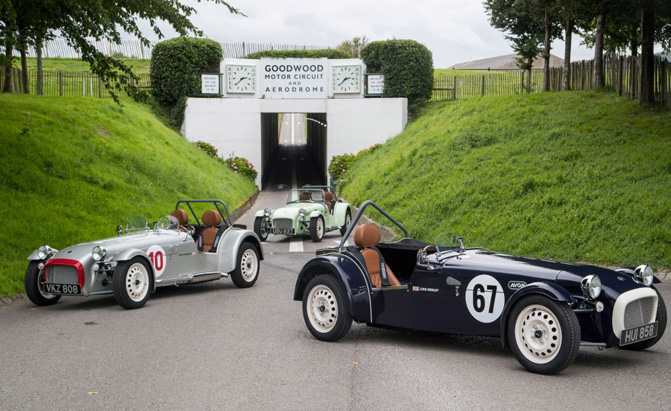 About a year ago, British Caterham built a special modification of their cult roadster Seven, which was called Sprint and was dedicated to the "merry sixties." Now the retro-roadster has a "charged" version called SuperSprint.

The novelty from Caterham is intended, according to the manufacturer, "for these gentlemen-racers." Distinguish its specially selected body colors with a contrasting front cover design (in total six color schemes are suggested), a new safety arc, a very compact windshield and retro notes in interior decoration - for example, a wooden steering wheel and original instruments. Caterham SuperSprint will be offered both in two- and single-seat versions. In the latter case, the passenger's seat will be closed by a special lid. SuperSprint will differ from last year's Caterham Sprint even more powerful engine.

If Sprint is built on the most affordable Seven 160, which is equipped with a 660-cc three-cylinder engine, developing 80 hp, then for SuperSprint its output was raised to 95 hp. "This is undoubtedly Caterham Seven, which looks as if we designed and released it in the mid-1960s," said Simon Lambert, the company's chief engineer. In total, Caterham plans to release 60 copies of retro-novelties, and each of them will receive a personal plate with the number.