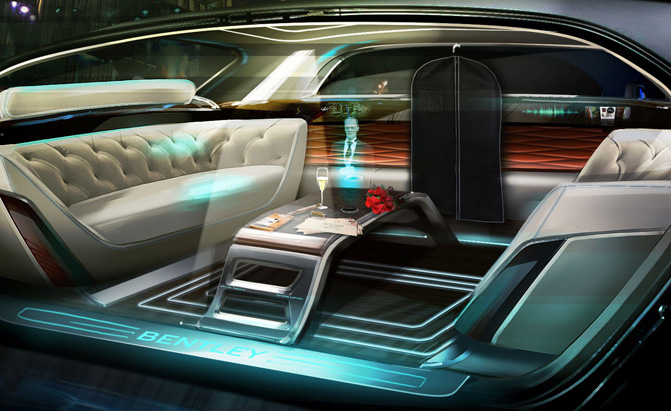 Bentley wants its cars to be completely autonomous in future and have a holographic butler.

Do you remember the “Future of Luxury” concept from the British company? It lacks a driver space! Though, the interior has been transformed to boast a meeting table and two comfortable sofas. The vehicle has dropped helm, pedals and seat belts. The automaker is sure that self-driving vehicles will be accident-free.

Evo informs that the British producer presented this idea at a small event held in the capital of Great Britain. The brand’s design director stated that the interior concept is not that far, it’s on the way, especially if you own a Bentley that is used to have a chauffeur.

The automaker also incorporated sleek screens of the usual wood panels. The chief explained that the technology is very close to reality. A transparent screen is 0.5 mm thick and it is able to play a high-resolution footages.

The director also stated that the automaker wants to offer stone as an option for the interior. It also intends to use “protein leathers and textiles” appealing to those leading a vegan lifestyle.