The famous company held a pre-premiere debut of the "charged" crossovers. Both cars were tested on the Nürburgring track.

At the DTM race weekend, the BMW brand held the first official debut of the BMW X3 M with the BMW X4 M. Technically there is no information on cars, but at least we can already look at them.

The specification of two new products is not disclosed. It is known that under the hood there is a proprietary inline V6 M TwinPower Turbo. Power, according to rumors, will be a maximum of 475 horsepower. The company said earlier that cars take an intelligent all-wheel-drive system with technology M xDrive.

The official debut for BMW X3 M and BMW X4 M has not yet been determined. 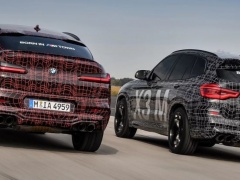