The 1st 2017 Acura NSX Has been Finally Produced 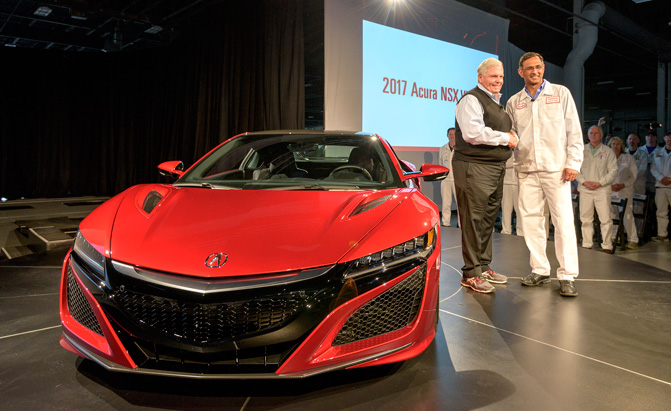 Finally, the 1st of the innovated Acura NSX sports vehicles has been produced.

The automaker has celebrated the 1st serial manufacturing of the next year’s model at its new Performance Manufacturing Centre. The centre is placed in Marysville (Ohio).

The 1st 2017 Acura NSX was obtained by Rick Hendricks. We remind you that he got a winning bid ($1.2 million) at Barret-Jackson auction last January. The Paediatric Brain Tumor Foundation and Camp Southern Ground received all proceeds from the auction. Hendricks became the owner of a Valencia Red Pearl Acura NSX. The model features carbon ceramic brakes, carbon fibber upgrades (such as roof and rear deck lid spoiler and the motor cover), non-such interwoven wheels and leather and Alcantara interior trim.

The next year’s Acura NSX is equipped with a 3.5-litre twin-turbo six-cylinder powerplant. The engine is joined to an enhanced 9-speed dual-clutch gearbox. Every NSX motor is developed in Anna (Ohio). It is machine balanced and bench-tested. Moreover, it is broken-in to the equivalent of 150 miles. The last thing was done in order to be sure that every NSX motor is track-ready upon client delivery.